Where is it and Why Go? Port Douglas is a small coastal town about 1 hour north of Cairns in North Queensland. Over the last couple of decades it has grown from a small undiscovered village to a raging tourism mecca for Far North Queensland, and there are no signs

Where is it and Why Go?

Port Douglas is a small coastal town about 1 hour north of Cairns in North Queensland.  Over the last couple of decades it has grown from a small undiscovered village to a raging tourism mecca for Far North Queensland, and there are no signs of a slowdown, with ever more brand name resorts and shops opening their doors in this beautiful beach side enclave.

It is very popular with backpackers, campervan users and the resort crowd alike.

The attraction for many visitors is the weather, 4 Mile Beach and the food.

With plenty of sunshine, delicate warm seas, soft sea-breezes and a warm climate all year round, Port Douglas’ weather is hard to beat. And whilst the southern cities of Melbourne and Sydney are shivering in their wooly clothes, in Port Douglas it’s T-shirts and thongs (flip flops). 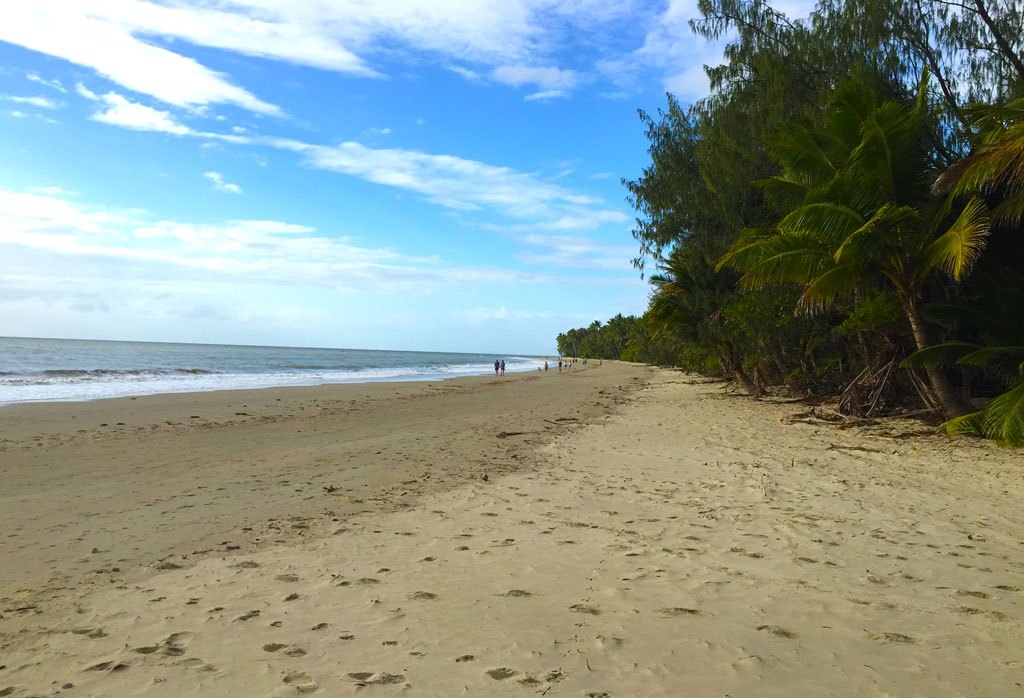 4 Mile Beach, as the name suggests, is a beautiful silk-sand beach stretching from the eastern end of the town, south along the peninsula that the town sits at the end of. Even in a country that has thousands of miles of beach, this beach is still particularly famous – and not very crowded, even by Australian standards.

The main drag of Port Douglas (Macrossan St) is quite simply the best place for restaurants and food in north Queensland. Even the much bigger nearby town of Cairns doesn’t compare. Whether the meal is a $38 surf-and-turf or a $8 pizza, the competition between food outlets here is so fierce it has raised the quality level way above what any other town in north Queensland can supply. Even Brisbane is hard pressed to compete! 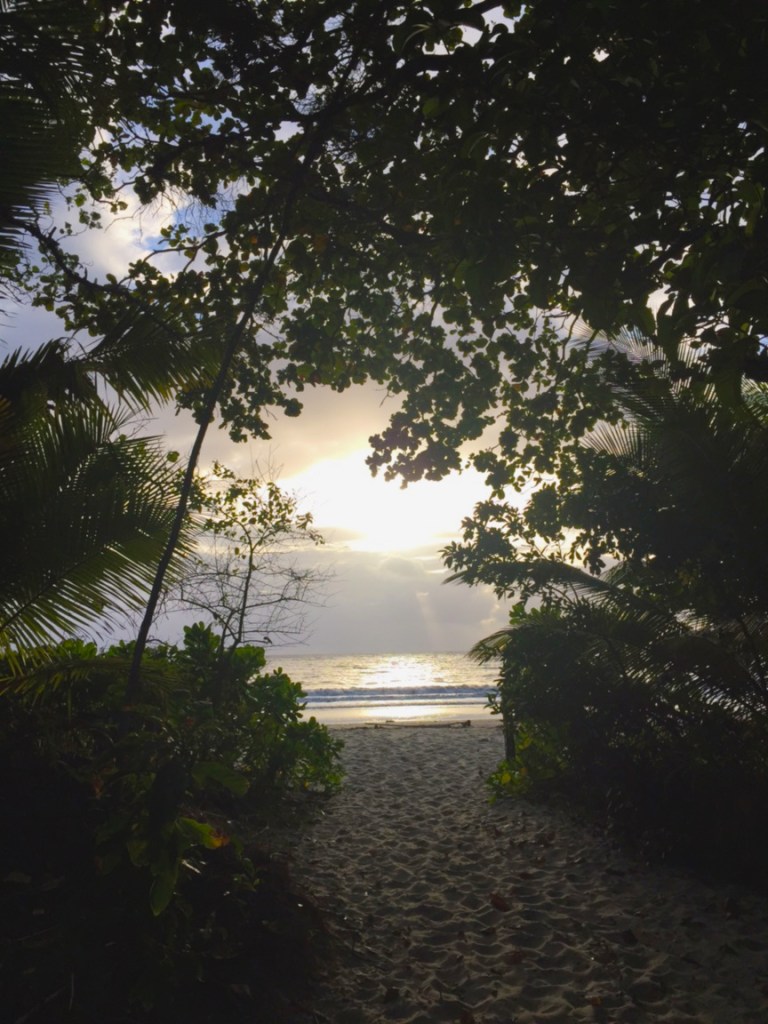 In the 1960’s Port Douglas was nothing much more than a fishing village with a population of about 100, then, in the 1980’s, an infamous Australian entrepreneur called Christopher Skase decided to build a Sheraton Mirage in the area. From there on, tourism has burgeoned on a fantastic scale. Skase is long gone, but  Port Douglas is now one of the tourism jewels in the Great Barrier Reefcrown with the town now supporting a permanent population of over 3,000 people and about just as many tourists.

Initially designed for the wealthy traveler, it now caters for all budgets and there is even room for campervans. An hour north of Cairns, it is the best known tourist town in North Queensland and famous across Australia.

When to go and why? 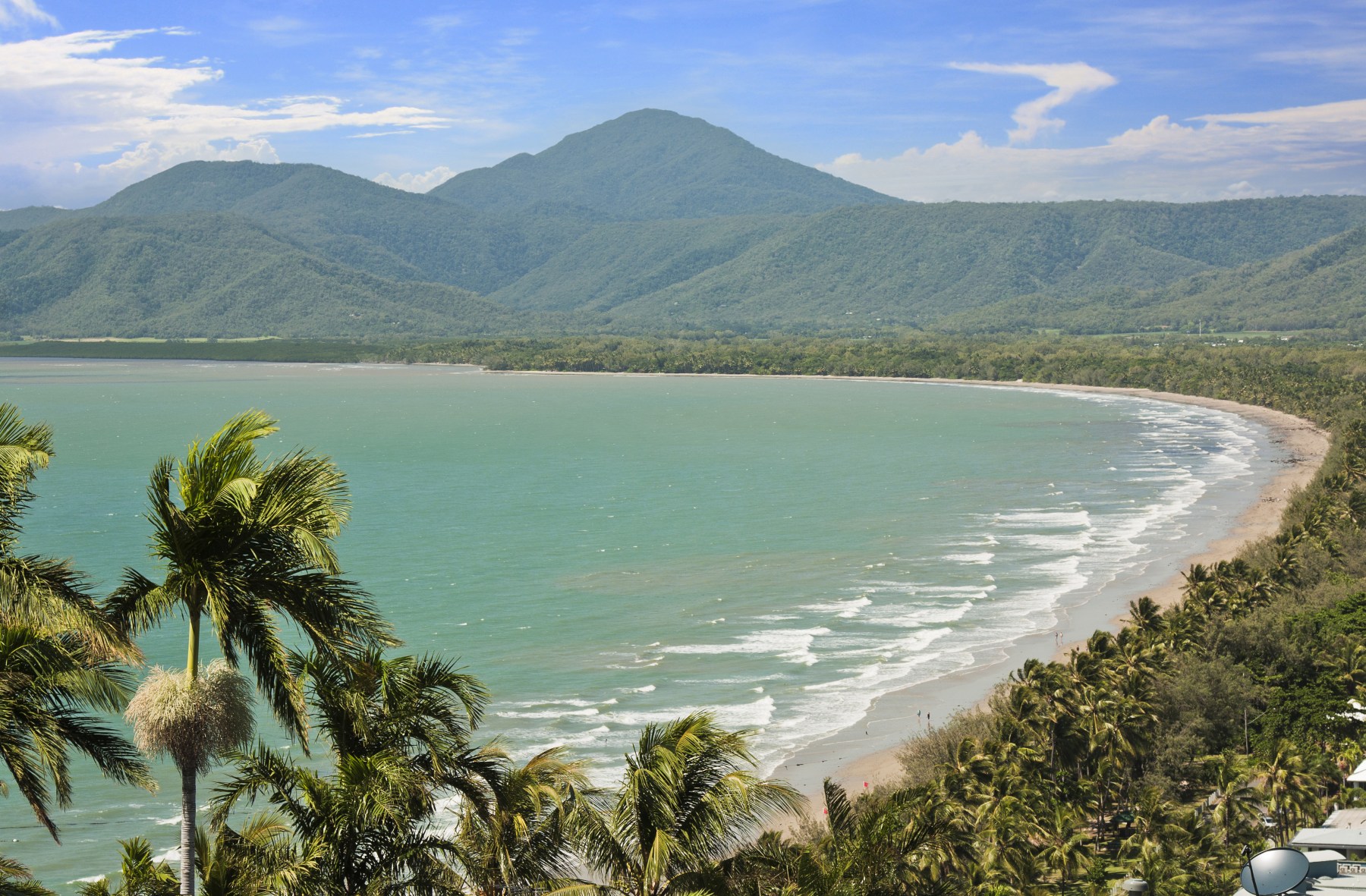 With an average temperature of around 27°C for the year Port Douglas is like most of the tropics and is split into a “dry” winter season and a “wet” summer season. Dry season is May to October and is generally considered the best time to go. The reasons? The weather is more temperate and consistent throughout this time averaging around 25°C, there is less rain and here are no “stingers” in the water so there is better beach access.  Dry season is also high season.

Wet season is November to May. Through this period you can expect hotter conditions, a “muggier” feel in the air and a daily downpour usually in the afternoon. On the bright side there are some fantastic lighting storms! Wet season sees a downturn in tourists so if you are looking to avoid crowds then this is a better time to go and things might be a little cheaper. This is also “stinger” season.

“Stingers” is the term for Jellyfish. The most famous in the region is the Box Jellyfish which has an extremely painful, long tail of barbs that can stretch meters from it’s main body. The sting from these will most certainly end up with a trip to hospital and is also known to cause death. There are also a myriad of other less famous Jellyfish that are in the waters at this time.

During the wet season, there is a stinger net put up along 4 Mile Beach near the town so you can still swim. It is not advisable to swim outside the nets at this time.

Primary things to do in Port Douglas:

There are plenty of things to do there. 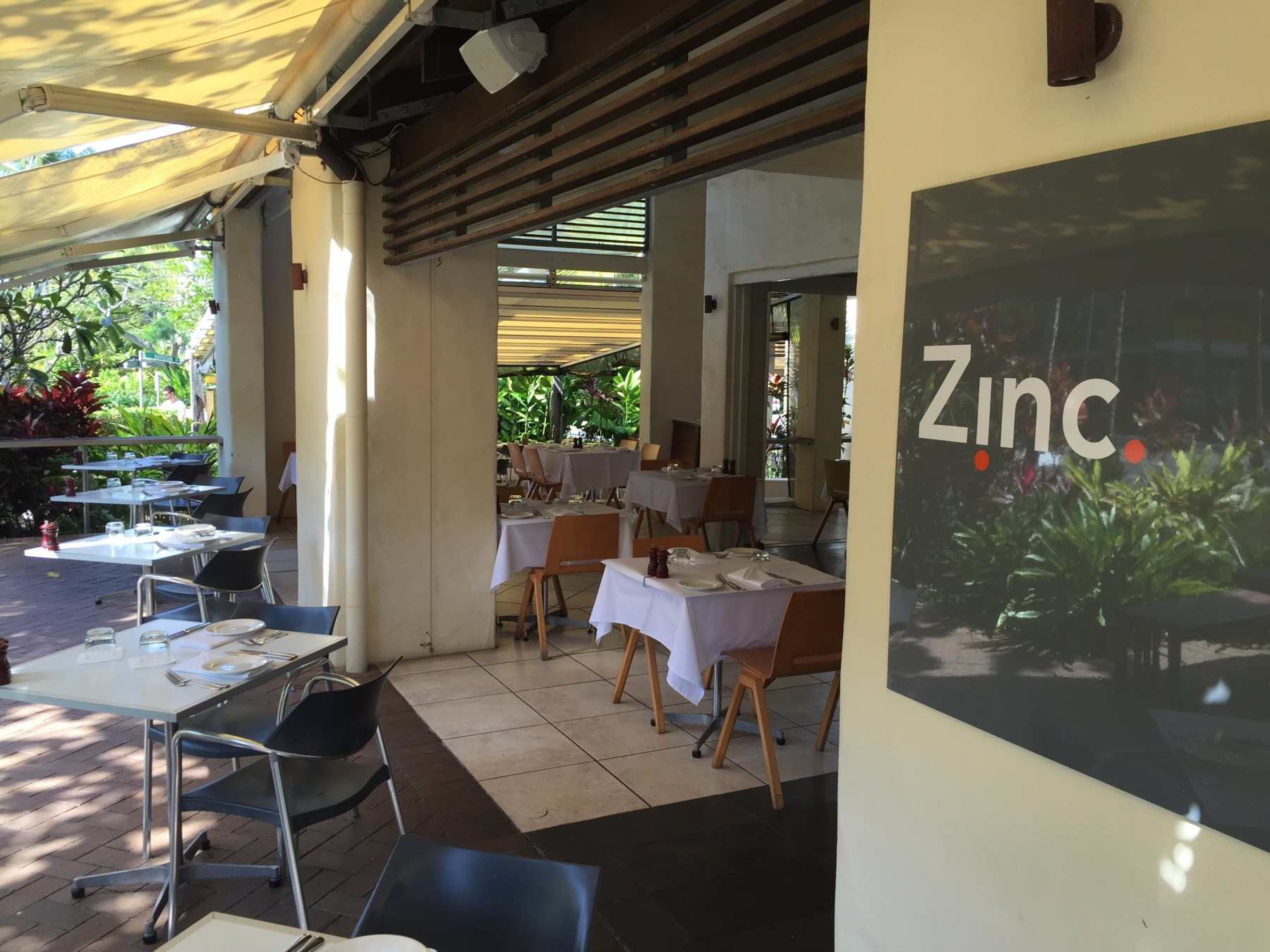 As already mentioned, Port Douglas is one of the best places in North Queensland to eat! There are plenty of restaurants and cafes throughout the main street as well as scattered around the whole peninsula. Many of the resorts have restaurants and cocktail bars that are open to all comers so if being surrounded by luxurious grounds and cocktails takes your fancy, them simply head on in to a resort. Your cash is as good as anyone’s behind the bar, but if you are looking for people watching, the best food and maybe making some new friends at the pub(s), then Macrossan St is the place to go. From one end to the other is just an array of restaurants and cafe’s on both sides of the road. Starting at the eastern end with Zinc, a swanky modern Australian place with amazing food, you can head all the way up the street picking any culinary style you like until you get to the Courthouse Hotel, the oldest and best pub in town!

If you are up for something very Queensland, make sure you stop in to the Iron Bar a little before the courthouse on the same side of the road. Cane Toad races each night are quite a sight!

If getting out to the reef is your priority there are plenty of opportunities. All the major boat companies have stalls and shops along the main drag, or a short walk out to the Marina will also find them. Stop for a bit of shopping and a lunch whilst at the Marina!. You can expect a reef snorkel or dive to cost you about AUD$230. You will find trips both cheaper and dearer than this, but it is good to have a starting point figure so you get an idea what you are in for. The trips last all day, departing around 8:45am and getting back around 4:15pm. There is plenty of competition so shop around before deciding who to go to. The most common place to go is called the “low islands”, which has the name suggests are reefs and islands that barely stick out of the water. 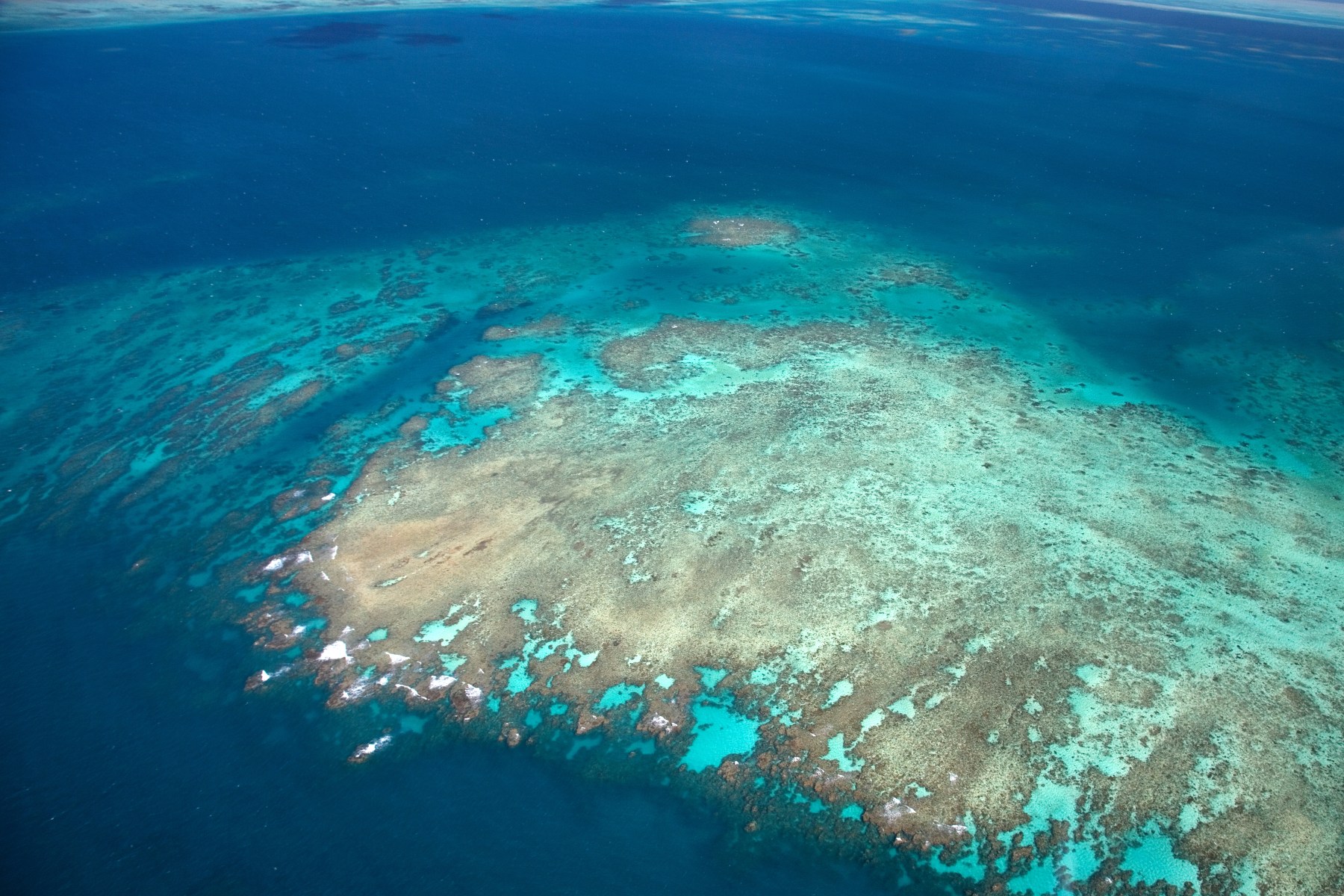 If looking for more natural wonders on land, this is where your campervan will come in handy. Whilst everything within Port Douglas is easy to walk to, things like Mossman Gorge, Hartley’s Crocodile Adventures, the Skyrail and other attractions will require a journey. Most things in Queensland are spread out, so having your own camper in this part of the world is very handy. This could be why Cairns has the 4th largest amount of campervan hire depots in the country, with around 33 companies represented there, despite being nowhere near the 4th largest city. 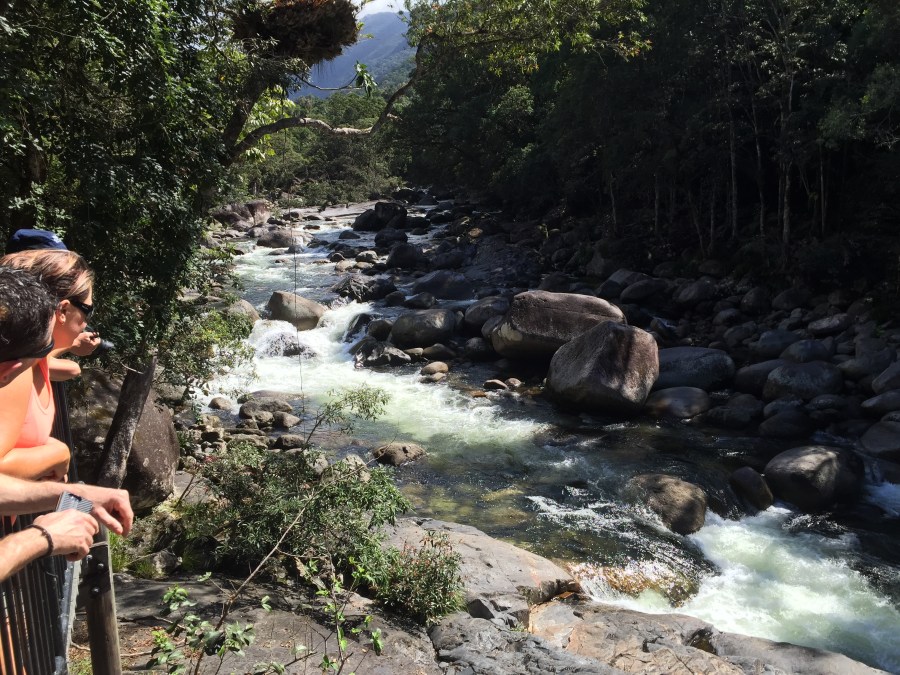 Mossman Gorge is part of the Daintree National Park and is about 1.15hrs from Cairns. Like so many natural attractions across Australia, the money train has pulled in here and the barriers have gone up.  It’s feature is the Mossman River cascading through the park surrounded by the rain forest. You have the ability to walk along the river in parts, swim and just generally take in the beauty of a National Park – but don’t forget to pay your fees. 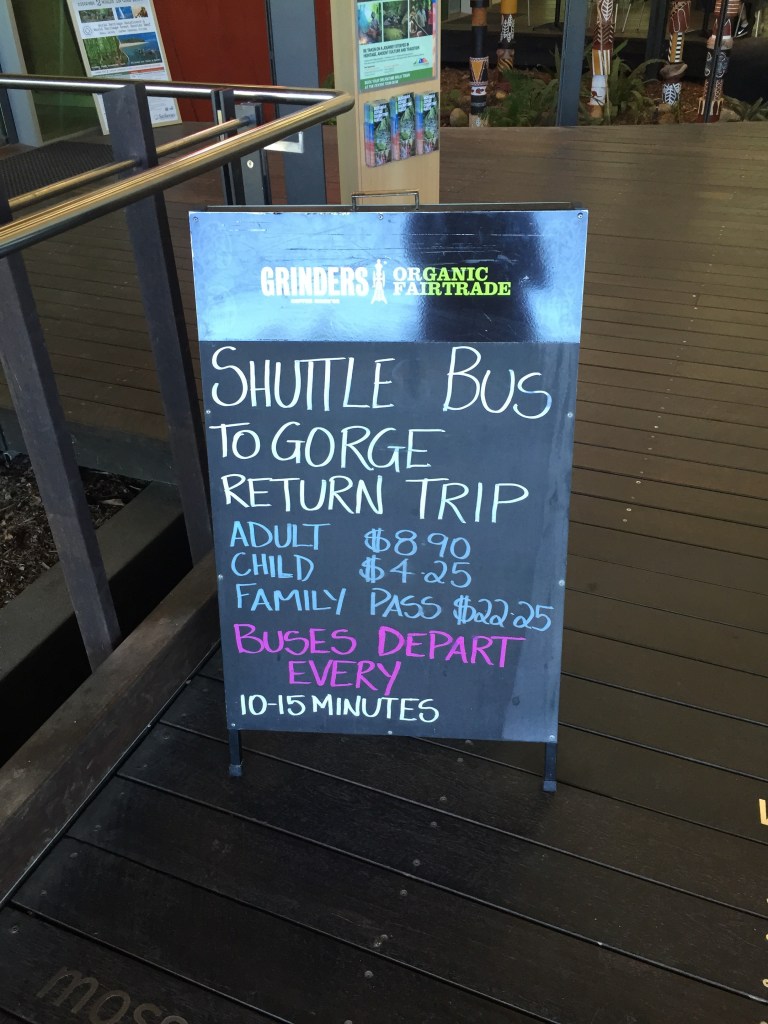 As is becoming annoying popular in Australia, you take a natural wonder that has been around forever, has had tourists going to it for decades for little or no fee, you build a gift shop, put up barriers and charge exorbitantly. In the case of of Mossman Gorge the fee is around $10pp to go the final 2 km of the road in a shuttle bus. You would think that if you choose to or are fit enough, you would be allowed (or even encouraged) to walk the last 2km, but alas, the shuttle bus drivers are likely to pull up and tell you to turn around walk back and get a ticket. I don’t see why? It is a National Park and is already being paid for by the government and if someone chooses to enter it on foot, they should be allowed. However, if you put a gift shop and an over-priced, under-serviced cafe, you are allowed start gouging the poor tourist as hard and as far as you can, leaving yet another bitter taste in the mouth of said  traveler having to pay for extra things AGAIN that have already been paid for. So another tourist goes home and remonstrates to their countrymen how over priced and over regulated Australia is. Rant over …… for now.

If you have never been to a rainforest before, then this will be a beautiful and wonderous experience. There is a short track to a look-out over the river that goes for about 540m from where the shuttle drops you off where you can also stop for a swim. Alternatively there is a much longer walk that continues on from the look-out over a bridge to a 2.4km looped track. If you are the fitter type of traveler then this longer track is for you. If you just want to get to see some stuff, then get back to the campervan and drink beer, then the shorter track is for you.

The river water is quite a “refreshing” temperature, so if you are going to go for a swim, don’t be a pussy and wade half-way and then turn around . Wade a short way in and the crash into the water with some style. It’s the only way to enter cold water. That being said, on a really hot day, you’ll have trouble keeping people OUT of the water.

If the river is not your style and you have your own campervan, then head a further 90mins north to Cape Tribulation. This is where the rainforest meets the sea and is just as interesting. Without a fee.

There are a couple of caravan parks to park the camper whilst in Port Douglas. 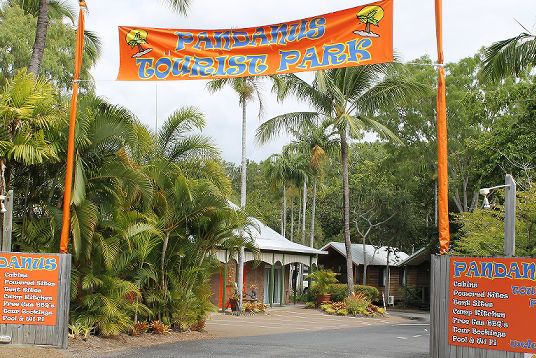 Tropic Breeze Port Douglas is the other one and is slightly closer to the main part of town.

During high season you can expect to be paying $48 a night for 2 people, during wet season, slightly less.

Now, there are plenty of car parks around Port Douglas, particularly up around the Marina. You could try staying there, but technically there are no camping signs there and I reckon the towns cops are on to that.There are also a some of the same signs around beach car parks a little out of town.But there are also some dead-end streets that end up at the beach, that are not technically car parks, that don’t necessarily say that you can’t stay overnight.State law allows you to sleep in a vehicle so unless the council specifically has signs up saying you can’t, then you can. But be mindful of neighbors, they will be your best friend or worst enemy in this regards. 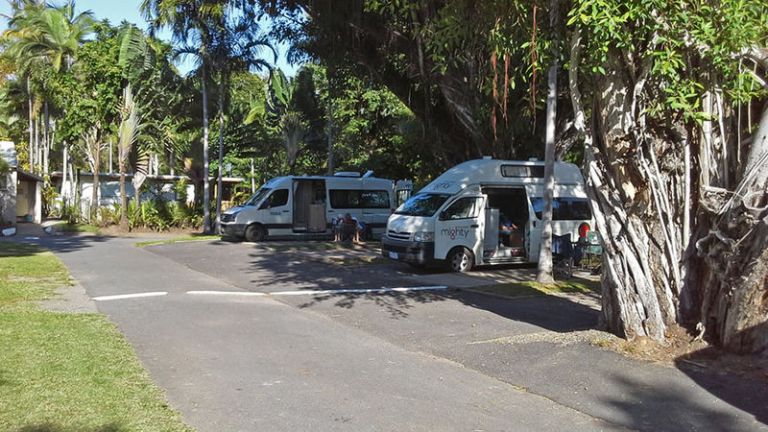 If Resorts are your style, there is no shortage here with every budget and style catered for from family run things to the massive multi-national names with the golf course thrown in.

Plenty of campervans visiting Port Douglas. Check it out…. 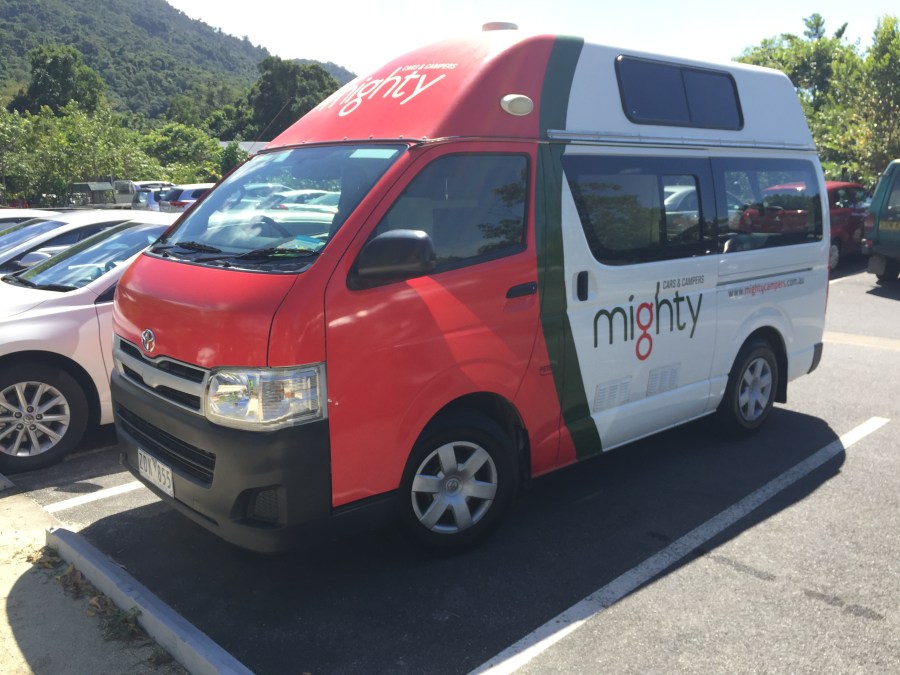 Port Douglas is an awesome place to stop for a couple of days. You can eat and shop yourself silly, stock up on supplies, make plenty of new friends, have some uniquely Australian experiences and then move on the somewhere less refined.

Find out more about the region with out Cairns article.