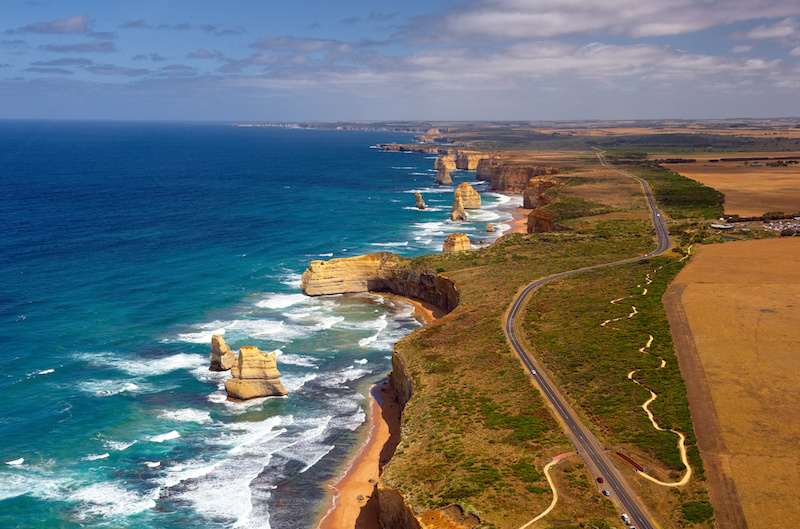 The Great Ocean Road in Victoria Australia can be easily accessed via Geelong and officially begins at Torquay and ends in Nelson. The site for the road was first surveyed in 1918 and was constructed between 1919 and 1932 by 3000 returned soldiers II as a memorial to those servicemen killed in World War II.

Today the Great Ocean Road is one of the most significant and picturesque drives within Australia and the around the world. It extends for a total of 273 km’s and for Victorian state tourism purposes, is divided into three distinct sectors, The Surf coast and Otways, Shipwreck Coast and Discovery Coast. The Surf Coast is approximately 100 km and takes in such popular tourist towns as Torquay, Lorne and Anglesea. Along the Surf Coast you will find excellent swimming locations, beaches and of course the world famous Bells Beach which each year hosts an Easter surf carnival attracting competitors from around the world. You will also find historic maritime locations, lush forests, waterfalls, walks and excellent restaurants.

Further along the Great Ocean Road is the Shipwreck Coast which as the name suggests claimed many a vessel, especially during the early navigation of the Australian coastline by English, French, Portuguese and Dutch sailors. You will also find the icon and internationally featured Twelve Apostles, Loch Ard, Bay of Islands and an amazingly, and naturally, sculptured coastline. The Shipwreck Coast road also passes through small villages, croppy outlooks and inland cascades until it reaches the major town on the road – Warrnambool which offers many attractions but maybe none as enjoyable as whale watching as the whales migrate south between June and September each year.

Finally the Discover Coast section of the Great Ocean Road is focused around the major town of Portland and surrounds taking in such delights as the Discovery bay Marine National Park and the views from Cape Bridgewater.

Along The Great Ocean Road you will experience vast cliffs, the majesty of the Twelve Apostles, thundering surf beaches, pristine beaches, tranquil bays and lush inland bush. You will find remote and tranquil camping locations and plenty of locations to spot some famous Australian wildlife such as koalas, wombats, echidnas, kangaroos and an abundance of native birds.

To do justice to this amazing stretch of coastal Australia allow an minimum of 4 days with two weeks enabling visitors to experience all the Great Ocean Road in Victoria Australia has to offer.