Bordered by 3,500 kilometers of coastline and crossed by various mountain ranges, Morocco is characterized by an incredible diversity of people and landscapes. Tucked caddy-cornered between the Atlantic Ocean and the Mediterranean Sea in North Africa, Morocco is cut by the various fingers of the Atlas Mountains and lone range of Rif Mountains in the north. These characteristics give Morocco an aerial fingerprint unlike any other in Africa.

Morocco is known for being one of the most tolerant of the Arab nations. The country is relatively safe, peaceful, and stable. Moroccan people, both Arabic and Berber, are also noted for their warm hospitality and warm, friendly nature, in fact, Society in Morocco is still steeped in its Muslim identity but is tolerant of various types of people, cultures, and religions. It’s Berber and Jewish past help to keep the minds of the people open and Morocco is the only country in the Muslim world with a Jewish Heritage Museum.

So, we cannot discuss Morocco without mentioning a handful of regions that make this country such an attractive destination. Following are some of the highlights that stick in travelers’ minds when visiting, here some of the most visited and charming places your dear readers should be visiting on your coming holiday 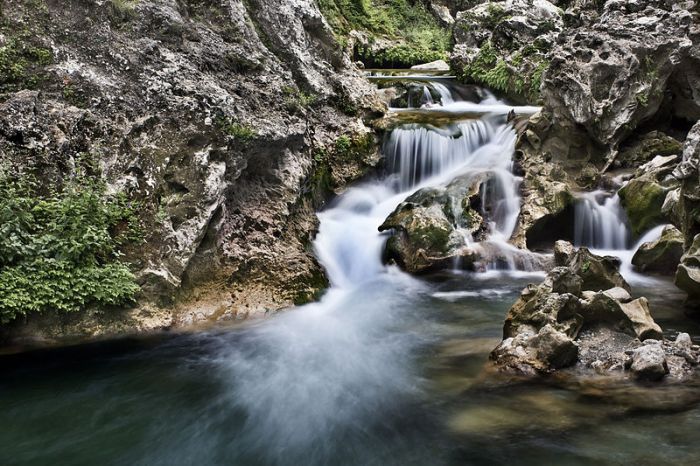 A jewel hidden deeply within the Rif Mountains, a short walk from the village of Akchour in the province of Chefchaouen city. As a mountainous region specified by a mixture of high mountains, charming waterfalls, and beautiful views, it is considered as one of the most superb places in the northern Maghreb. These cascades are located in a high altitude and poor into a natural pool and considered one of the most preferred places for visitors and tourists worldwide. And while there is a lack of means of transportation to reach the place visitors find it an opportunity to enjoy the view and explore the place hiking.

2. Lakes of Isli and Tislit (The Lakes of Love) 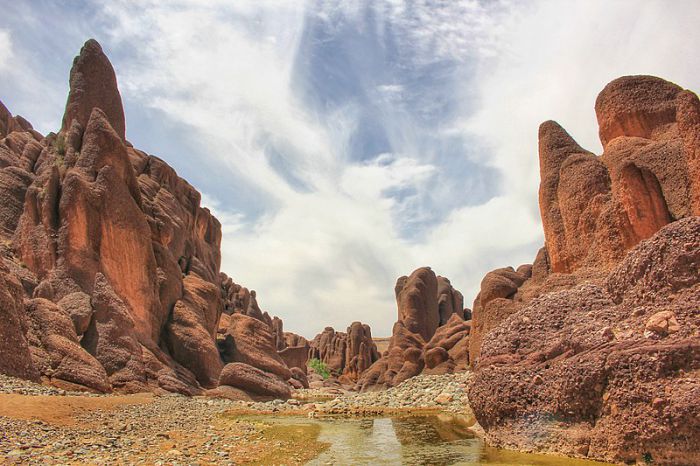 The Lake of Tislit is a lake located in Morocco’s High Atlas Oriental National Park, near to Imilchil town, and the Lake of Isli is near to the first lake by almost 9km (two hours walk for hikers), with an altitude of 2272 and 2266 meters. These lakes has a very beautiful story behind them. The myth says that the two Lakes were named Lake Isli and Lake Tisli after two lovers, a sort of “Romeo & Juliet” Moroccan style, descended from two different Amazigh tribes ‘’Ait Brahim’’ and ‘’Ait Ya’za’’. Their love couldn’t succeed because the two tribes were actually enemies. But the two lovers devoted themselves to pure love, they could not live apart. So they decided to run away to the mountain of Isslan. When they arrived, they sat down and began to cry because of the fate that had forced them to leave their parents, brothers, and friends. So they cried for days and the tears they poured out soon became two lakes which bore their names: Isli and Tislit. Conscious that they had made a serious mistake in fleeing and could not retrace their steps, they preferred to drown each one in his lake than to live separated. They say that every night they come out of the lakes to meet. The death of the two lovers is celebrated each year by the wedding festival held in Imilchil every October, a festival that brings together all the candidates for the wedding. Fact: In Amazigh, Tislit means the wife, and Isli means the husband.

A section of the Tamraght River in the Moroccan High Atlas Mountains, located approximately above 20km north of Agadir city. Known for its abundance of rock pools, mountains and rivers, 3 large waterfalls and large clean turquoise natural pools, that made it looks like paradise on earth. A strategic place for climbing, cliff jumping, swimming and also camping. And to get there, the whole trip is easily accessible to anyone. You can either rent a car, campervan, join a guided hike, use public transport, or even walk for hiking lovers. 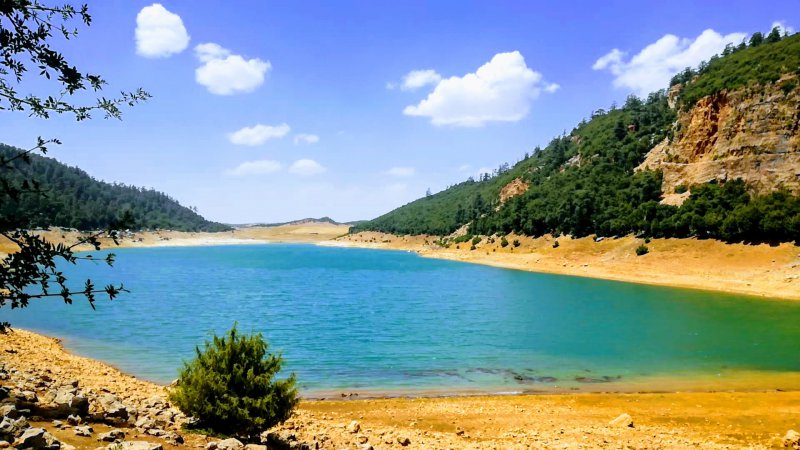 In Amazigh means the green lake, actually a natural lake located east the city of Khenifra in Morocco, a part of the National Park of Khenifra. Enclosed and occupying a depressive zone with an average depth of 26 m, and surrounded by limestone reliefs, covered with a predominant forest of cedars and oaks. Its location in the Middle Atlas cedar gives it a special blue-green color. Also, the waters of this lake are rich in fish of different species, tench, carp, roach, perch or pike. And classified biologically and ecologically as an important region to receive migratory waterbirds in the Mediterranean Atlas region such as Black birds or Green Neck Ducks during winter, what make of it the perfect place for camping, hunting, setting bonfire and fishing.

One of the marvelous places to visit in northern Morocco, in the regional province of Tangier-Tetouane-Al Hoceima-Chefchaoune, twenty kilometers from steha a small and rural commune. Mountains, rivers, waterfalls, Oued el kannar is a mixture of landforms who is rich in fresh waters, hospitable paths to hike and well-maintained campsites. Fun fact; If tourists are so eager to come to Chefchaoune’s suburbans, it is also to consume a product of the region growing on the borders of Oued El kannar: cannabis. The quality of the city hash is legendary. Kif or marijuana, sebsi or joint ... Chefchaouen may be blue, but she has a green thumb. For all the hippies here, this is the best place for you, I mean; seriously! there is free weed for everyone.

Long ignored by Moroccans and overlooking the Mediterranean Sea to the north and east, Belyounech is a small fishing village located 16km north of Fnideq and 7km west of the Spanish city Ceuta. Well hidden from the prying eyes, the village is surrounded by green mountains and is dominated by the mass of Jbel Moussa, also called in Spanish "La Mujer Muerta" because of its particular shape recalling the grace and forms of a woman extended. The history of Belyounech goes back to ancient times, whose legends say that the ancients considered the mountain of Jbel Moussa as the column of Hercules on the African side of Gibraltar. There is a lot to explore near Belyounech Village such as its beach who is the last beach of northern Morocco and one of the most beautiful of the Mediterranean coast. Its fine golden sand and turquoise water seduce all visitors and invite them to soak their feet in cold water, the mountain ‘’Jbel Moussa’’, and the Point cires in french and Punta Cires in Spanish, it is promontory and two islands off the northern coast of Morocco within the Strait of Gibraltar. 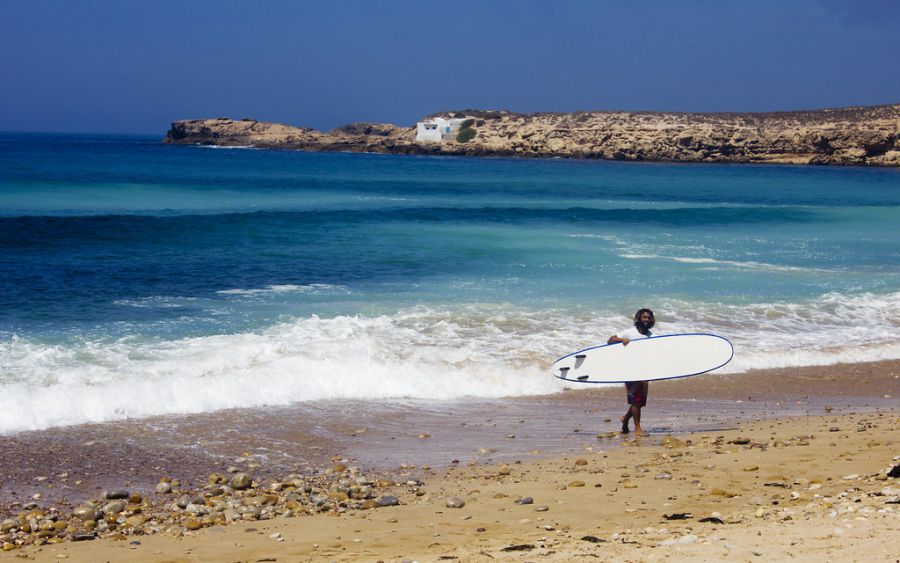 A small town and rural commune in Agadir-Ida Ou Tanane Prefecture, Souss-Massa, Morocco. Imsouane is the favorite destination for many tourists. This is due to its breathtaking scenes as well as the calmness, tranquility, and perfect waves for surfing. There are two main spots for surfing in Imsouane beach: La Cathedrale, a beach break spot and La Bay, a point break spot. Imsouane town is also known for its small port where vendors and locals can buy fresh fish straight from the sea. Because of its remote location, a car or campervan rental might not be suitable for this adventure―not unless you have a brave heart. 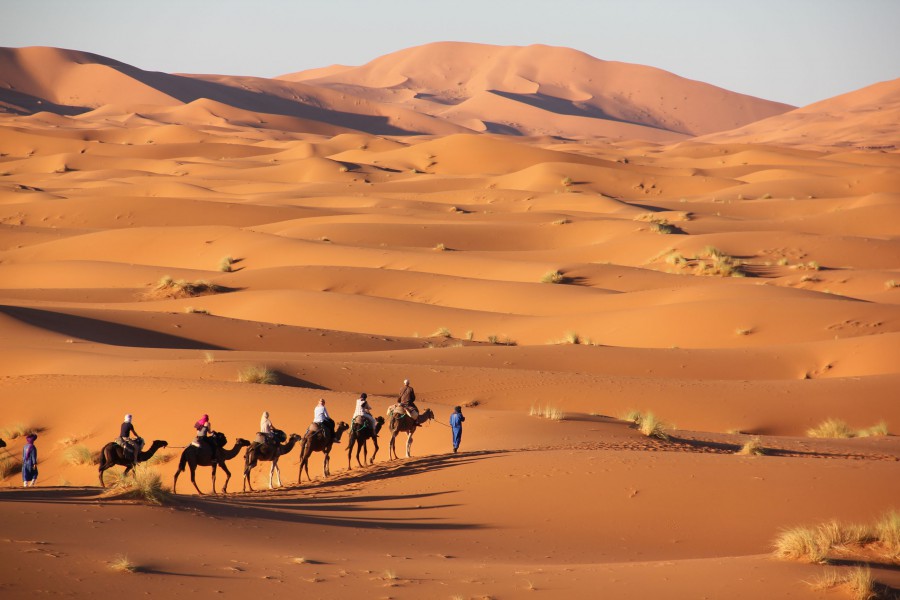 On the way from the Errashidiya the main city of Tafilalet region (Southeast) and Once you pass the small Rissani City, the first time visitor gets shocked by a sudden appearance of huge dunes of sands making shapes of mountains in the middle of nowhere. This picture will only dissipate when you see some green patches here and there in the heart of the drought. These are the oases of Merzouga characterized by palm trees surrounded by various kinds of plants. Tourists are inspired by Merzouga desert which changes color between golden shiny and orange according to sunrise and sunset. Two types of tourism made Merzouga a global destination: - Seasonal tourism mainly for hospitalization by taking a bat under the sand. With high temperatures that make the sand hotter, the flow of visitors asking for the healing of various diseases of the joints (Arthritis). - Ecological for sports and exploration along the all days of the year, especially for lovers of the desert. You notice guided tours by foot or on camels across the charming dunes of sands

Recognized as a UNESCO world heritage site since 1987, the Ksar Aït Benhaddou in Ouarzazate is one of the most extraordinary Kasbahs in Morocco. This giant fortification, which is made up of six kasbahs and nearly fifty ksours (individual kasbahs).. Located 30 kilometers from Ouarzazate and has a unique architecture, its towers are visible from far and the brown color is consistent with the nature of the region. The Kasbah is located on a highland surrounded by narrow pathways to provide adequate protection from the invaders. It was built to be efficient economically, established alongside the river Wadi al-Maleh, which feeds the neighboring agricultural lands that guarantee nutrition. The houses built of mud and wood, which is suitable for the region and nature, providing cold in the summer and warmth in the winter. The construction materials used in these homes require extra care and continuity of attention, which has made the Ait Ben Haddou an example of preserved construction of high quality. Also, Several films have been shot in Aït Benhaddou, including  -The Message -Marco Polo -The Mummy -Gladiator -Alexander -Babel -Prince of Persia -Son of God 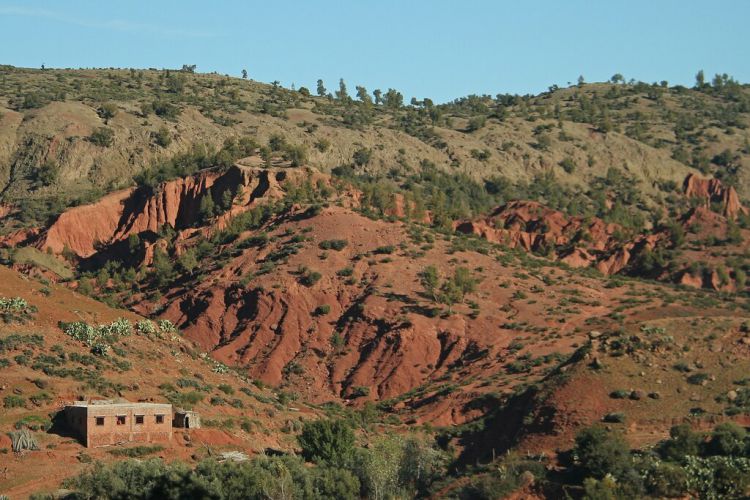 The Atlas Mountains are a mountain range located in northwest Africa. It stretches around 2,500 kilometers (1,600 miles) through Algeria, Morocco, and Tunisia. The Atlas Mountains are not a continuous chain of mountains but a series of ranges separated by wide areas of land, which are called plateaus. The mountain range separates the Mediterranean and Atlantic coastlines from the Sahara Desert. It has several passes that provide routes between the coast and the Sahara Desert. Toubkal, located in Morocco, is the highest peak in the range, and in North Africa. It is 4,167 meters (13,671 feet) high. The Atlas Mountains have long been home to some of North Africa's most remote villages who have built a reputation for indulgent and stylish hotels. Kasbah Bab Ourika stands out for pure indulgence and majestic situation. Douar Samra wins the charm award hands down with a wonderfully earthy rambling village property with a just-so shabby chic. And whilst the Kasbah Du Toubkal is more expensive, the superb terraces, lounges and views pull together to create a superb stay. Hotels are clustered around three broad areas, the Ourika Valley, Ouirgane and Imlil. The Ourika Valley is closest to Marrakech located in the foothills of the Atlas range. It is an incredibly picturesque valley.