One of the joys of road-tripping in a campervan is open fire cooking! I never missed an opportunity to get out the foil and wrap up my potatoes and pumpkins and throw the cast iron pot full of nice meaty stew into the flames. And here is another great idea....

My husband, dog and I spent a year in a small 4wd campervan around Australia (yes, we are still married after the trip). Our cooking facilities were just a double stove burner perched on a sturdy flap out the back of our campervan. No oven, no microwave and only a 32 litre fridge that usually held a good few litres of wine and beer leaving not so much room for food. 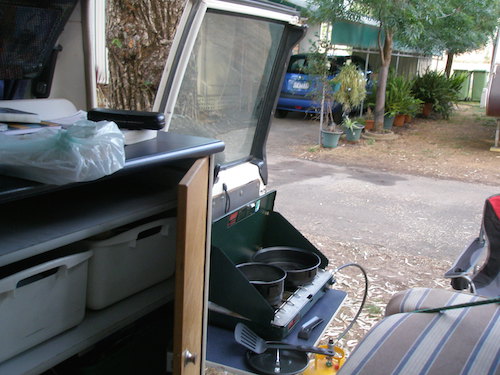 The upside was it was a gas stove, so it didn’t matter where we were we could always cook something up. While we did spend quite a few nights eating pre-packaged and instant heat up meals, there was, I can happily report, no Spam on this trip as we had learnt some years ago on a previous Queensland campervan adventure to Airlie Beach that Spam and heat equals a gelatinous mess. Never travel with Spam. But I digress, what glorious meals did we cook up on our little camp stove? As well as the prepackaged meals like Stagg chili, Jaipur vegetables and numerous dahls it was many, many nights of pasta and whatever meats or vegetables we had to hand, tossed into a tomato-based sauce on many occasions. I missed my overflowing cupboard of spices and oils and vinegars that were back in Sydney, but in order to travel and fit my entire wardrobe into the bush camper I had to make some sacrifices. What's a girl to do! 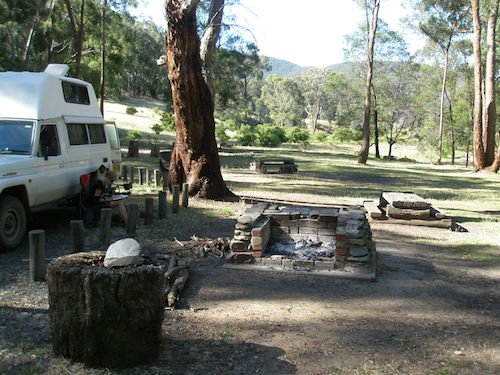 The cooking I did REALLY enjoy, though, was when we had the opportunity to make a camp fires! Sometimes that was in nice little set up with hot plates, other times just an open pit. Either way I never missed an opportunity to get out the foil and wrap up my potatoes and pumpkins and throw them in the coals or the cast iron pot full of nice meaty stew in the flames. Maybe add some mushrooms, some green veg and often I'd turn to a little pack of goodness from the sauce isle, for an added punch of flavour. Throw it all into the pot! Fantastic!

Related: Coffee and Campervans - Best Coffee When You Hit The Road 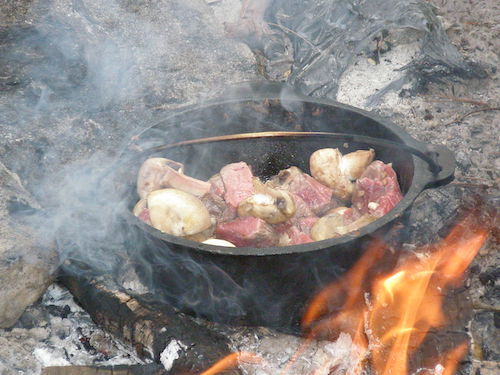 There is nothing like the taste of a partially caramalised piece of pumpkin or the slight smokiness your jacket potatoes get from the ash of a fire. Cooking the pot low and slow over a cooler part of the fire to make sure the meat is tender and juicy is the trick. Ahh, now that is definitely my favourite type of campervan cooking! I also think back how we did, on the odd occasion, indulge in the old school camp 'chocolate pieces and bananas in foil', just for a little bit of a treat. Tasted just as good at 30 something as it did in my teens. 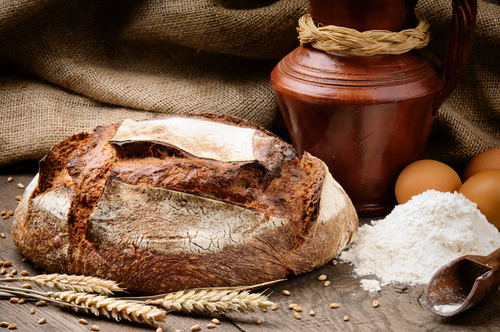 Lastly however is my favourite morning indulgence when the ash was still hot and we could scare up a tiny little fresh flame is the Aussie favourite, damper. Cooked in the same cast iron pot we often got the added flavor of the previous nights meal but that was just a bit of a bonus. I stuck with the most basic of recipes as I would always have the ingredients to hand, just some flour, salt and water. If I did have some butter, well, lucky us, I would rub a bit into the flour for an extra bit of flavour. Mix it all through and shape into a ball. Wrap up in some foil or baking paper then into the pot with some coals and ash underneath and extra coals and ash on top. I’ll admit to a miserable first attempt on our trip when the pot went into the open flames, but that lesson was soon learnt to the benefit of our taste buds! After that fresh damper in the morning with a coffee. Legendary!